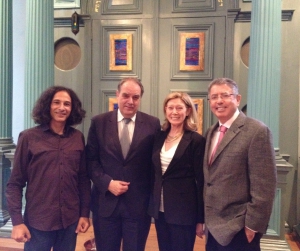 In the month of June, KUNSTENISRAËL facilitated three tours for Israeli ensembles. Several hundred people attended the concerts in this Music Connects-series at eight synagogues all across the country.

The melodious concerts of EvenSanne celebrating their debut CD were featured in a broadcast of Nefesh TV. To see excerpts from the concert at the Uilenburger Synagoge in Amsterdam and interviews with the musicians and Ken Gould (then director, now board chair), watch this video starting at the 27-minute mark.

A prestigious delegation attended the latest concert of Tiltan, the group led by Israeli guitarist David Golek, in Delft on June 19th: Mayor Verkerk of Delft and his wife (not pictured here) and the Ambassador of Israel, Haim Divon and his wife Linda. (pictured left to right: David Golek, Mayor Verkerk, Mrs. en Mr. Divon)