On Wednesday, February 17th the exhibition Virus was opened in Museum Beelden aan Zee in The Hague with the work of Israeli artist Eyal Assulin (see our calendar). Curator of the exhibition is Ronit Eden. KUNSTENISRAËL director Ken Gould gave the opening speech (see below). 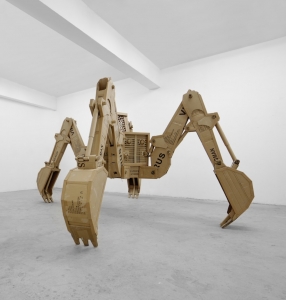 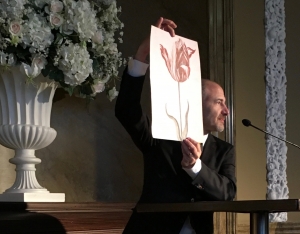 Introductory words Ken Gould on the occasion of the opening of Eyal Assulin’s exhibition ‘Virus’ (curator Ronit Eden) in Museum Beelden aan Zee (‘Sculpture by the Sea’), The Hague.

Good evening, ladies and gentlemen. It is a great honour to have been asked by Jan Teeuwisse to address you this evening. My task is to briefly provide some context for the work of Eyal Assulin, called Virus, within the work of KUNSTENISRAËL. Just to manage expectations, let me be clear: I am not here to interpret or introduce the work to you. It speaks for itself far more eloquently and subtly than I could hope to.

Allow me to give a bit of background about my relationship with Beelden aan Zee. I am director of KUNSTENISRAËL. A completely independent organisation working without political or religious affiliation, we get no support from the Israeli government, and our fund supports the presentation in the Netherlands of the work of artists from Israel, whether Jewish or Muslim, Druze or Christian, left wing or right wing. We work as a bridge and as a platform to launch international careers for the most diverse possible group artists from Israel.

Next to our work as grant maker, we also organise trips to Israel for key figures from the Dutch visual arts world – curators of leading museums as well as journalists – to meet artists in Israel in their studios. I’m very glad that both Jan Teeuwisse and Beelden aan Zee’s head of presentations Alessandra Laitempergher have participated in these expeditions, led by Ronit Eden.

This is also not the first time that KUNSTENISRAËL has supported an exhibition in Beelden aan Zee. Ruthi Helbitz Cohen’s remarkable “Spider’s Strategy”, also curated by Ronit Eden, was one of our first grants. And now, more than 250 exhibitions, concerts, and theater and film presentations later, we’re back, this time with the thought-provoking work of Eyal Assulin.

Assulin is a multifaceted artist and has received various prizes. In 2014 he was winner of the prestigious prize for Art and Design of the Israeli Ministry of Culture. He was born in 1981 in Ofakim, a city in southern Israel, near Beersheva. There and in the nearby Bedouin town of Rahat, he developed an affinity with nature. He is a critical observer of technology and industry and their impact on individuals and society.

Assulin’s work is critical… and strange and funny and complex. That complexity is what makes art an especially effective instrument for reaching the observer on a non-verbal, sub-rational level.

Our organization operates in the belief that the work of Israeli artists – even when the work has nothing to do with the country itself – can build bridges of understanding, providing perspective on a very complex country by allowing us to look through the discerning and critical eyes of its artists. As I already stated, art speaks eloquently and subtly, it provides nuance and fresh insights, it provokes thought.

But while I have long thought of art as a means for building bridges, a combination of this very persistent cold – – and Asselin’s work ‘Virus’ has inspired for me a new analogy: Art as inoculation. A vaccine – not against a particular ideology, religion or political stance – but rather against closed-mindedness. Art vaccinates against tunnel vision about, among other things, a country and a population too diverse to put in a box.

Perhaps it’s ironic, then, that this exhibition is entitled Virus. But what do viruses do? They create a response, a reaction, resulting in the making of anti-bodies. Just like a vaccine.

To close, I’d like to ask your attention for another work of art, made nearly 400 years ago. What does the work of Assulin have in common with this lovely 17th century gouache of a tulip? A virus.

This shows the species Semper Augustus, famous for being the most expensive tulip sold during tulip mania. The effects of the so-called Tulip breaking virus are seen in the striking streaks of white in its red petals. The virus led ultimately to the extinction of this genetic line. But undeniably, it also lies at the source of something exceptional and inspiring.

I wish you an inspiring evening. Thank you.