On September 25, 2014, the Dutch national newspaper Trouw published an opinion piece by the board chair of KUNSTENISRAËL, Ms. Els H. Swaab, and director Ken Gould concerning the subject of a cultural boycott of Israel. 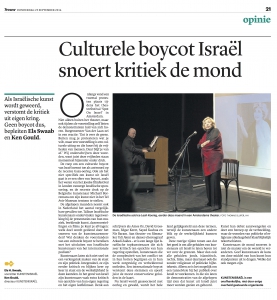 Last weekend two protests took place during the theater festival ‘Spot On Israel’ in Amsterdam. Not only outside the theater, but also during the performance itself, the protesters loudly made their presence known. Mayor Van der Laan said in response: “That crosses a line. Outside you may protest where you want, but a performance is a cultural expression and is a fundamental freedom. That’s simply off limits.” We endorse these words, since at the moment, precisely these freedoms are under pressure.

The call for a cultural boycott of Israel has increased in response to the recent Gaza war. Even when not specifically related to the art of Israel, there is an atmosphere of boycott, such as the banning of the Jewish Film Festival in London because of Israeli sponsorship and the recent pressure upon Belgian artist Michaël Borremans not to exhibit his art in the Tel Aviv Museum.

In recent months, the number of similar cases in the Netherlands has also increased. Numerous Israeli artists encounter resistance to the presentation of of their music and dance performances, visual art and films. It leads one to wonder: what purpose could be served by silencing artists’ mouths? What do proponents of a cultural boycott think is achieved by the exclusion of Israeli artists from the international stage?

Artists are not quick to become an extension of the state and its politics. Rather, they are rather critical, helping give new perspectives on reality. In Israel’s case, artists are often even more critical of their own government and their own surroundings. Writers like Amos Oz, David Grossman, Edgar Keret, Sayed Kashua and Nir Baram, theater and filmmaker Udi Aloni, dancer-choreographer Arkadi Zaides – there’s a long list of top Israeli artists who are very critical of their government, artists who in their core understand the complexities of the conflict and who carefully and illuminatingly dissect it in their work. An international boycott silences these voices and even plays into the hands of the most conservative forces.

In the August 4 issue of NRC Handelsblad, the famous Israeli novelist Assaf Gavron made a passionate plea to readers and viewers to be open to critical sounds from within Israeli society, namely the sound of artists. With Israel being so closely associated with war and violence, the entire country becomes equated with these concepts, whereas artists can give another view of situation. “We are being lumped together with the majority, we are viewed as part of the evil. We are being boycotted – academics, writers, artists. (…) We are trying to present a different, sensible voice, but our voice is not being heard (…)”

These turbulent times demonstrate that it is good to hear all the sounds of Israeli artists, far beyond the borders. But then all sounds: Jewish, Islamic, right, left, as well as those without a religious or political connotation. Only in this way it is possible to prevent tunnel vision about Israel among the public. In that sense, the recent demonstrations show just how essential it is that art from Israel be seen and heard.

Art has the capacity to stir debate and to appeal to the imagination, while political or religious platitudes are clearly not up to the task. Silencing artists is not the way to change the world. Give artists the opportunity, through their art, to express their points of view, whatever they may be.